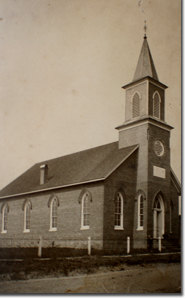 Occasional services were held here beginning 1846, when the Schellsburg charge was formed. Reverend Kast began regular services in 1852. A church building was agitated but not begun until 1853. The deed for a lot, sixty by one hundred sixty feet, was granted by John and Catherine Leighty to Conrad Ickes and Fredrick Michtley, trustees, on June 25, 1853 for thirty dollars. The church, a frame building, thirty two by forty feet, costing eight hundred dollars, was dedicated in November, and a congregation was organized that same day. This church was used until 1886. It belonged to the St. Clairsville charge from 1865 until 1869.
At a congregational meeting held on January 1, 1882, the following committee was appointed to seek a location for a new church, viz: Adam Ickes, N. H. Wright. Samuel Wright, D. W. Prosser and George Stufft. An article of agreement was made April 1, 1882, for the present lot between Austin Wright, owner and the following council: Austin Wright, Isaac Wright, Adam Ickes, Samuel Whittaker (deacons) and H. N. Wright (elder). The sum was two hundred dollars and the deed conveyed on May 20. The cornerstone was bid on July 18, 1886 with J.M. Rice assisting the pastor, Reverend Gruver. At the dedication on February 2, 1887, Reverend W. W. Criley of Altoona preached, and also Reverend Rice of St. Clairsville.
The building is brick. thirtysix by sixtyfour feet including the spire and the pulpit recess. The windows are cathedral, stained glass and memorial. The cost was four thousand dollars, a fourth of which was raised the day of the dedication.

Continued history of St. James Lutheran Church (Pleasantville) from minutes of council meetings down through the years.

July 26, 1879 – We have written on the subject of the need for a new church building. Subject was dismissed for the present.

March 5. 1882 – Subject of a new building was again discussed and a committee formed to look for a suitable site. Three lots were considered but the present site offered by Austin Wright ‘agreed on unanimously

March 19, 1882 – The congregation was notified of impending purchase and they authorized sale of old church.

Jan. 1883 – The council agreed that The Pastor Watterick should accompany the deacons to solicit subscriptions to pay for the proposed new church.

Feb. 28. 1886 – Congregation unanimously agreed that the disposing of the old church be placed in the hands of the building committee.

July 28. 1886 – Arrangements to start laying bricks. Pay one dollar a day to the men who attend the brick laying.

Aug 5. 1886 Committee met — paying accounts. Sam Smith two dollars. Wn Whittaker – one dollar and twenty five cents. Charles Andrews – fifty cents. Treasurer now find, he has paid out fifteen dollars over and above what he been paid in.

Oct. 26, 1886 – Sold old church to the Brethren Church for one hundred eighty-five dollars. The Lutherans kept the organ and Sabbath School book case.

Apr. 17, 1887 – George B. Stufft died, aged thirty two years, nine months and eleven clays, one of the building committee and one of the church council. A good and true man. The first corpse carried into the new church. Funeral service conducted by Reverend L W. Watterick.

Apr.22, 1888 – Reformed Church to use our church while theirs is being repaired.

Feb. 3, 1941 – Talked about repairing church steeple. Charles Follmer agreed to build table and kitchen would be used for class rooms.

June 2, 1942 – Roof of the altar recess to be examined and repaired if needed.

Jan. 4, 1943 – Motion to take care of the application to General Synod for pastoral assistance motion made to discontinue night services until April.

April 30, 1945 – Accepted bid from the Atkins paper store for one hundred thirty five dollars to paper church (labor and materials.

July 3, 1945 – Ten dollars to council of Schellsburg Lutheran Church for our share of parsonage.

Jan. 9, 1946 – Motion to buy a Parish Register in partnership with Schellsburg.

Feb. 8, 1956 – Received one hundred ten dollars from Department of Highways for front footage.

Nov. 27, 1956 – Motion to accept the recommendation of the church council to work out with Schellsburg and  Dr. Putnam.

Jan. 1957 – Motion to accept the official “resolved” that this congregation petition conference to divide the Shellsburg West End charge into two charges — one to consist of Lybarger, Mt. Olive and Mt. Zion — the other, St. Matthew and St. James

Oct.8, 1958 – Special council meething to discuss sidewalks — installed and paid for by young people’s class – donations of time and materials and the men of the council.

June3, 1959 – Bert Netrour was given permission to take outside toilet (so we must have had indoor restroom completed)

June 1, 1960 – Mentioned to continue the bulletins if Schellsburg agrees.

June 8, 1961 – Motion to finish rest room and let old log remain rather than put in new one.

Dec. 6, 1961 – Authority was given to draw one hundred ninety eight dollars from a trust fund to help with the full payment of new carpet.

Dec. 2, 1964 – John Wissinger is authorized to oversee the completion of a new well and water system

Oct. 6, 1976 – Wine and common bat to be used for communion — Mike Holhmberg is intern — no constitution can be found, new one will be written.

Feb. 1, 1978 – Incorporation of congregation was worked on by attorney – Discussed purchasing a mobile home for intern’s use.

April 16, 1978 – Synod approved a loan to us for four thousand six hundred dollars for mobile home.

June 6, 1984 – Blue Paramounts are made by ladies group – motion made to begin outside basement steps.